Niger: Azadi Project Train Migrants in Multimedia for Employment Opportunities
Niamey has just hosted from 19 to 25 May 2019 a training session for former migrants in the field of multimedia.A training jointly organized by the Azadi project and the International Republican Institute (IRI) aims at training former migrants in the field of multimedia with a view to strengthening and facilitating their social reintegration.The goal of the Azadi project is to provide returnees with digital skills and then connect them to local community radio stations for internships.By providing them with digital skills such as radio and multimedia, we are helping them to look for job opportunities that can provide a career, not just low-skilled, everyday jobs for returning migrants.

Niger to close Cominak subsidiary of Orano
The Chronicle of Commodities is now interested in the uranium market, a market that could be described as depressed in recent years. In Niger, one of the two subsidiaries of the French giant Orano (formerly Areva) will probably have to close its doors in the next two to three years, says the Minister of Mines, lack of sufficient profitability.Last week, in front of the Nigerian deputies, Hassane Barazé the Minister of Mines has gifted dark prospects for the Cominak, one of the oldest mines in the country, in which the state is a shareholder alongside the French Orano, the Japanese Overseas Uranium and Spanish ENU.This year and during the next two years, the deficit will widen. The calculation is simple, with a production cost of about 75 euros per kilo, Cominak’s uranium is too expensive, since the world price fluctuates between 54 and 55 euros per kilo.

Security council meeting towards mutualization of forces to combat terrorism
Nearly ten days after the deadly ambush of Tongo Tongo, which has about thirty dead on the side of our Defense and Security Forces, the President of the Republic Issoufou Mahamadou summoned the extended Security Council, this time here, to France and the United States of America. Indeed, it is in the presence of the French and American ambassador that the Head of State chaired said council. The meeting was attended by Prime Minister Brigi Rafini, Minister of State, Minister of the Interior, Public Security, Decentralization and Customary and Religious Affairs, Bazoum Mohamed, Minister of Defense, Kalla Moutari and the Minister, Director of Cabinet of the President of the Republic, Ouhoumoudou Mahamadou.

Insecurity in northern Nigeria towards a generalization of terrorism in West Africa?
Violence is gaining momentum in Nigeria’s central north, in the Kano, Katsena, Sokoto and Zanfara states, all of them bordering Niger. This violence is attributed to terrorist groups seeking to gain a foothold in the region, if it is not already done since many terrorist acts have been recorded in recent times ranging from armed fighting between these groups and the Defense and Security Forces. from Niger and Nigeria to kidnappings and killings of all kinds.Faced with increasing insecurity in this area, many people fled to Niger. For example, the massive arrival last week of more than 3,000 people in the Maradi region specifically to Dan Kano I and II, two villages in the Department of GuidanRoumdji.

According to our most recent information (26 May 2019) the West African CFA franc has the following exchange rates.

Proof of vaccination against yellow fever is required over one year of age entering the country. The government of Niger recommends vaccine for travelers departing Niger.

Caution Reminder as at April 09, 2019:Reconsider travel to Niger due crime, terrorism, and kidnapping.
Location: Niamey, Niger
Event: Terrorist groups continue plotting attacks in Niger and may attack with little or no warning, targeting foreign and local government facilities and areas frequented by Westerners. Security measures in Niger remain heightened due to threats posed by extremist groups. 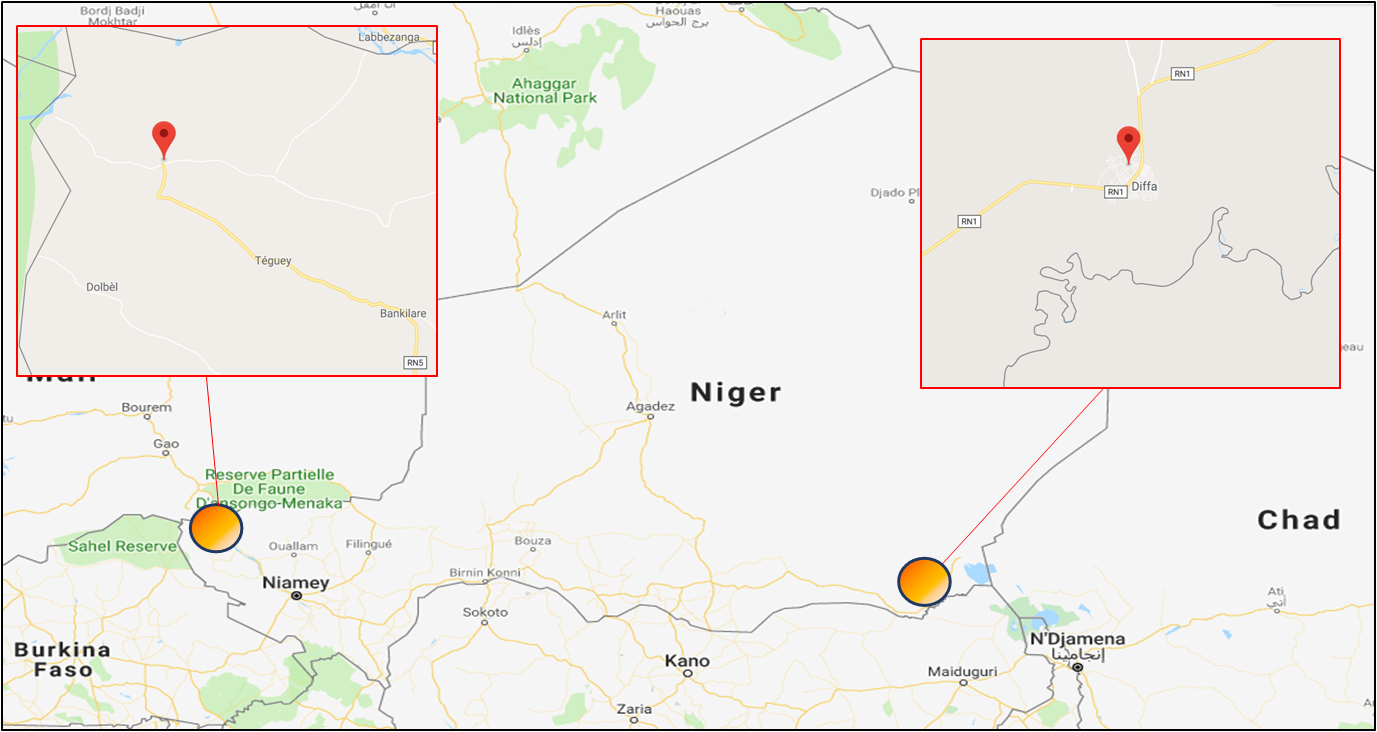 21 May 19 (Press Release): United States Embassy Niamey strongly condemns the terrorist attack in Tillaberi on May 14 that left 28 Nigerien soldiers dead. We offer our condolences to their families. These attacks offer a stark reminder of why the United States remains resolved in our fight to defeat terrorism. We stand with the Government of Niger and its people, and with all the countries in the region, as they confront terrorist threats. We will continue reinforcing our partnership to ensure Niger is secure and increasingly capable in the fight against extremist forces.

16 May 19 (Strategic developments): Presumed ISGS militants seized a vehicle and threatened the owner who is a merchant and former elected.

15 May 19 (Violence Against Civilians): Soldiers shot dead a youth during the curfew in Diffa.

The President of the Republic Issoufou Mahamadou presided on Wednesday, May 22 in the council hall, a meeting on security with the ambassadors of France and the United States. The objective of this meeting is to pool forces to fight all forms of terrorist threat in Niger and in the Sub-region. Upon their release after the meeting, US Ambassador Eric Whitaker said it was at the call of the President of the Republic, “I am here with members of the United States Embassy and my French counterpart for an important meeting during which we are talking about the current security situation in Niger “. “We discussed last week’s terrorist act and how the US and other security partners, including our French counterparts, can help the Nigerian government and people to ensure security at all levels.” he continued. The US diplomat also said, “We are committed to providing our continued support through a coordinated approach of support in the area of diplomacy, development and defense. With security and stability as preconditions for humanitarian aid and long-term economic development, we will continue to train and equip the Nigerian Defense and Security Forces to build their capacity against current threats, including those posed by terrorist groups.

G5 Sahel does not produce any results in the Sahel. It is like a big scam. Many Pan-Africanists see in this initiative a new form of recolonization of the Sahel by foreign powers such as France, the USA, Germany and Italy. All these countries multiply the initiatives to fool the heads of state members of this thing to install their military bases. The situation today is bitter it is even in the countries where they settled that the situation is deteriorating. These thousands of Western soldiers spend their time in the capitals of the G5 Sahel where they spend their time celebrating and pretending to help these countries while visibly, they have unacknowledged objectives as denounced by all actors in civil society.

Tutaré Risk Management regards training as a critical aspect of safe and successful operations in high‐risk environments. Ensuring our own staff and our clients’ personnel are effectively trained. This is a central element of both our capability and our duty of care.

Our Hostile Environment Awareness Training (HEAT) instruction is founded on relevant and current experience reflecting the development of our own instructional techniques which are tried and tested in hostile environments, the depth of our risk analysis capabilities as well as the fluid and often culturally sensitive nature of challenges facing our staff and clients working in volatile locales. The training package is designed to be interactive, enjoyable and we actively encourage client participation and questions throughout, the instructor will draw on his own experiences as well as course members.

Our Hostile Environment Awareness Training is crucial for anyone working in risk‐associated, insecure or hostile environments like Niger. Accordingly, the training aims at providing a comprehensive coverage of the relevant and is designed to equip participants with tools and skills how to avoid risks wherever possible, to cope with stressful situations, and to prepare them for day‐to‐day security threats as well as for worst‐case scenarios. Realistic simulations of real‐life situations complement essential classroom teaching.

Our Training
Suit varied learning styles
Delivered through a mixture of
lectures, discussion groups,
workshops and practical simulations and exercises.

Interactive and progressive
Courses are progressive and
interactive in nature, culminating in
a series of challenging and real‐life
scenario‐based exercises.

Delivered to suit your requirements
Regularly scheduled courses can be held either in Niamey or neighboring states or in other countries.

Who should attend?
NGO’s
News Organizations
Oil and Gas Workers
Independent Travelers
Anyone who lives, works or travels in volatile areas worldwide.

Companies who wish to fulfil
Duty of Care obligations for staff
Contact us:

Our training team is hugely experienced within the training environment. We pride ourselves on delivering not only classroom theoretical teaching, but also practical scenario‐based lessons and exercises. Our realistic, practical and hands‐on exercises provide confirmation that the information received can be used in practical scenarios. We all know that real life learning experiences are the greatest lessons. Our approach to training is based on the S.M.A.R.T model. Specific, Measurable, Achievable, Relevant and Timescale. This model is proven to be extremely effective when teaching students whose first language may not necessarily be English. Our combined approach of classroom theory, practical exercises and scenario lessons are a proven method of imparting information, knowledge and experiences with all participants. We believe life lessons are the best form of learning.

The overall objective of the 3‐day HEAT course is to increase the participants’ awareness of safety and security issues in Niger and to provide participants with the skills and tools necessary to deal with and reduce different types of risks and threats ‐ known and unknown. By the end of the course the participants will be trained to deploy to Niger or otherwise hazardous environments; to recognize and avoid potential threats and how to respond appropriately to different types of safety and security incidents.

The tailor-made high‐risk environment training courses we offer include:

Our driver training is delivered from the Royal Society for the Prevention of Accidents (RoSPA) approach, which is the UK recognized standard for trained drivers. Our driving instructor has a wealth of experience in driving and maintenance and has taught the RoSPA package to a multitude of students from beginners to advanced drivers, including security drivers, foreign military and overseas drivers with remarkable success. Students will learn not only the mechanics of the 4×4 driver training and mechanical operation, but traction demands, shift points and proper gear selection. Practical exercises include proper off-road braking, acceleration, obstacle avoidance, emergency reactions and recovery techniques, including improvised techniques. The culmination of training is an unknown terrain driving exercise that combines all elements of training.

On completion of the training, Tutaré Risk Management will submit a full course report. Once the Tutaré Instructor has completed the training, we can advise on:

Tutaré Risk Management is incorporated in Juba, South Sudan and Niger to specialize in supporting international business back into the regional business sector. We deliver an up‐market security service to government, humanitarian organizations, embassies, financial institutions and commercial companies and provide security risk management, transportation and “on the ground” operational support services. Tutaré Risk Management is an established and fully licensed company with a permanent presence in Niger. Our services include:

Disclaimer
Whilst we undertake to use all reasonable care in providing these reports to our clients, we cannot accept any liability for any losses suffered by the client, where we have exercised such reasonable care and skill. In any event, Tutaré Risk Management do not accept liability for any consequential loss or damage whatsoever however caused to or incurred by the reader of this report in acting or relying upon any information provided and contained herein.