The Nigerien government started through the Ministry of Budget, a biometric census of government agents, with the support of the World Bank, to detect cases of irregularity, we learn Thursday from official source. This operation, according to Niger’s Minister for Budget, Ahmat Jidoud, aims to “improve the efficiency of the management of human resources of the State. It also covers students and recipients of scholarships and social assistance and retirees, he said. Niamey’s objective in considering this biometric census is to control the wage bill as well as the stock exchange envelope. This census is the second of its kind that Niger is launching in the space of one year. At the end of April 2018, the government launched a biometric census of civil servants, health and education contractors, scholarship students and those on social assistance, as well as National Civil Service Appellants. (ASCN).

On Thursday, June 20, in a press briefing on the situation of military operations, the French Army also referred to this operation “ACONIT”, which is part of the efforts pursued by the Barkhane force in the Liptako-Gourma region, “Through operations, actions for the benefit of the population, and supporting partner forces”. According to the communiqué of the French Army Staff, from 7 to 19 June, Barkhane “successfully carried out a major operation alongside the Malian and Nigerien armed forces, against terrorist armed groups, at the heart of the border area between Mali and Niger, in the Liptako region “.

On Wednesday, June 19, 2019, around 8 pm, a serious traffic accident occurred after the police station located on the Filingué road outside Niamey. According to the Traffic Accident Reporting Service (SCAC) of the Police Department of the City of Niamey (DPVN), this is a collusion between a HIACE vehicle and a vehicle. The toll of the tragic accident is heavy since the competent services have recorded nine (9) people burned, nine (9) others seriously injured, fifteen (15) people slightly injured; and the two supplemented vehicles calcined.

Niger welcomes thousands of refugees who have fled extreme violence

According to the United Nations, Niger currently has about 200,000 refugees, the majority of whom come from Nigeria, and almost as many IDPs and returnees. In addition, the country has ensured the security of more than 2,700 refugees evacuated from Libya and waiting in Niamey for resettlement in third countries. “When the governments of the richest countries prefer to drive back refugees and drive them back to danger, we see here communities already destitute welcoming within a few weeks 20,000 people in search of security. But the conditions are very precarious, and the current influx of refugees weighs heavily on local resources and services, “says Abdoul-Aziz O. Mohamed, Chief of Mission of Médecins sans Frontières (MSF) in Niger. Guided by medical ethics and the principles of neutrality and impartiality, MSF aims to save lives and alleviate the suffering of those in need – including people on the move. Given the impact of the violence in the Lake Chad zone, with 250,000 internally displaced and returned refugees, our teams currently support 3 hospitals (in Diffa, Maïné Soroa and Nguigmi), as well as several health facilities. In Liptako-Gurma, the organization supports many health centers and huts in Tillabéry, where there are 70,000 uprooted due to insecurity. Further north, in Agadez, we provide humanitarian medical assistance to migrants, asylum seekers and refugees in collaboration with health authorities and other actors.

Event:  According to credible sources, terrorist groups continue plotting attacks in Niger and may attack with little or no warning, targeting foreign and/or local government facilities and areas frequented by large crowds. Vigilance and security measures in Niger remain heightened due to threats posed by extremist groups. 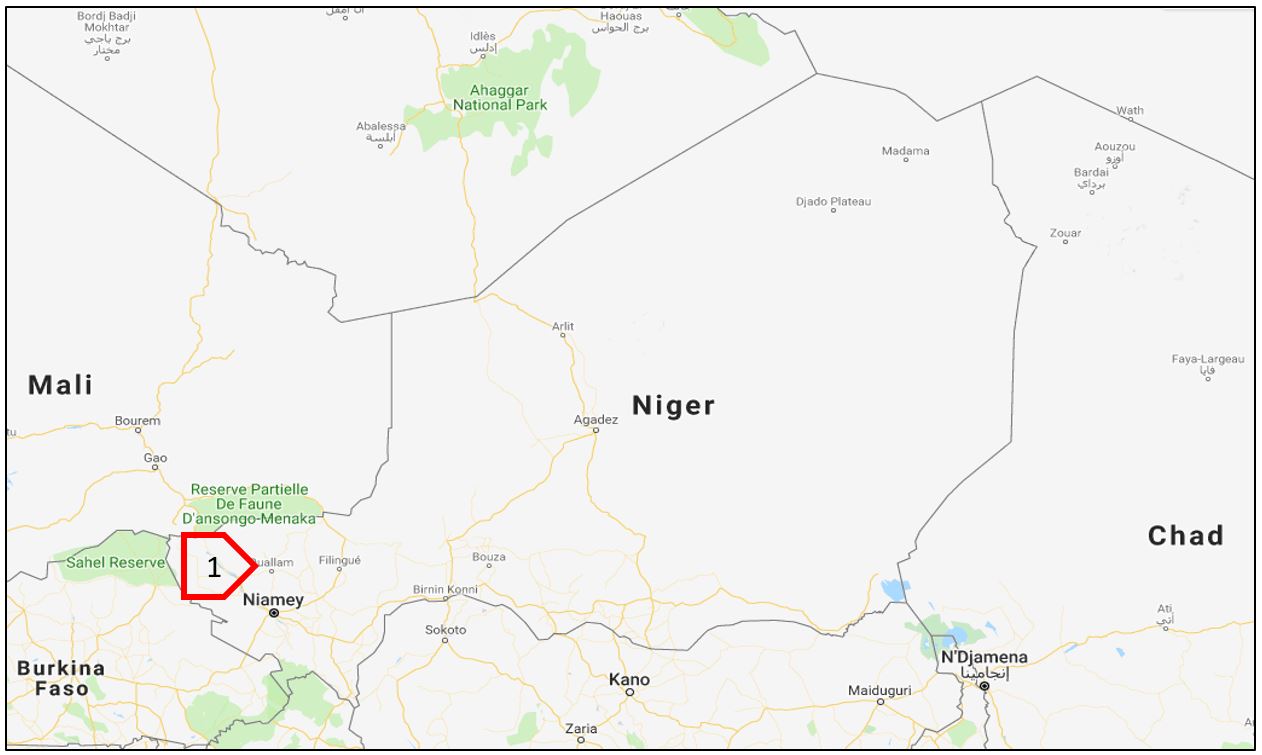 Over the past seven months, armed groups across Western Niger have executed a series of IED attacks – a first in the area’s ongoing insurgency. The increasing use of IEDs by the Islamic State in the Greater Sahara (ISGS) in the Tillabery and Tahoua regions of Niger indicates that the region’s insurgency is escalating and globalizing, following a similar trajectory to the conflicts in Burkina Faso and in Mali. The new and sustained use of IEDs – as well as accompanying strategic shifts – implies that hyper-localized groups are increasingly coordinating, both with each other and (in the case of ISGS) with the global core. 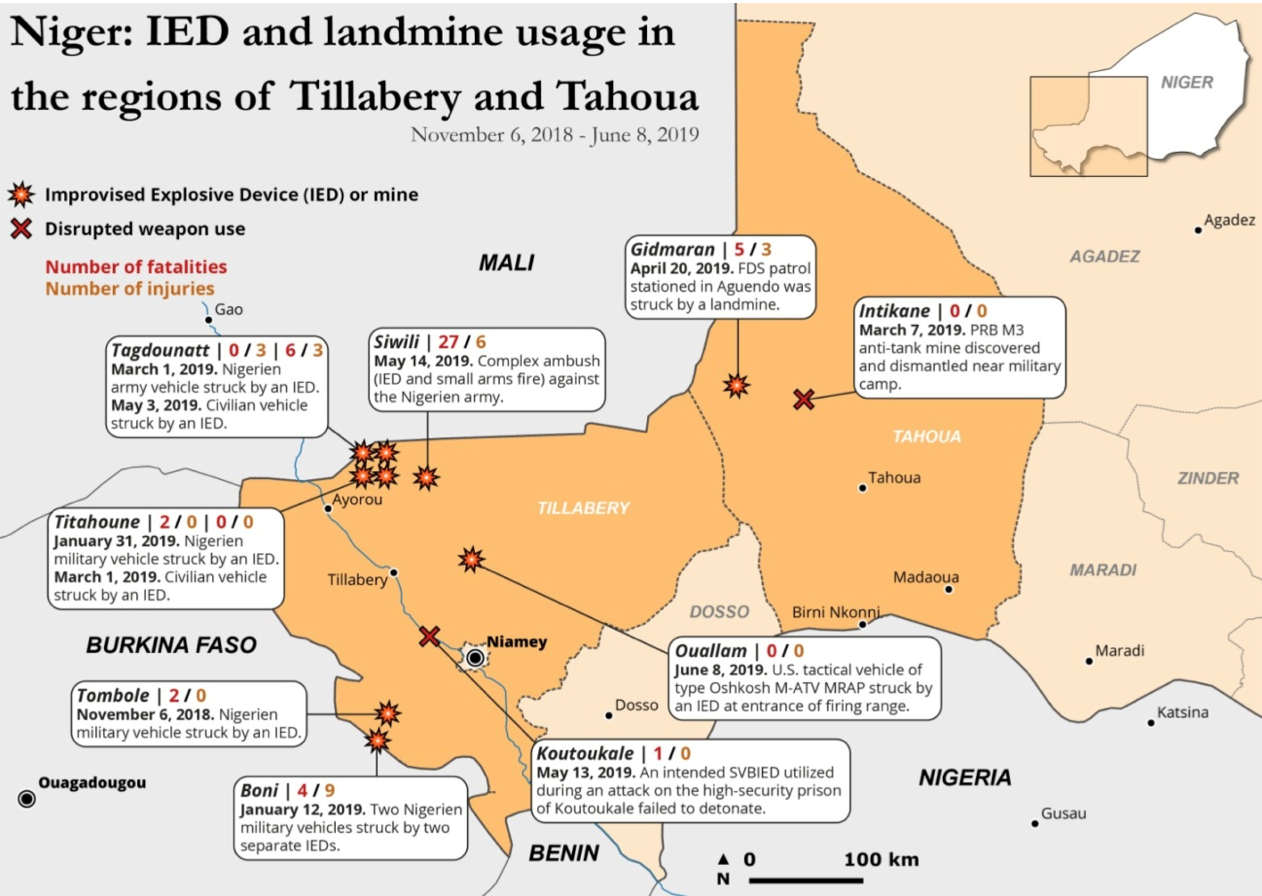 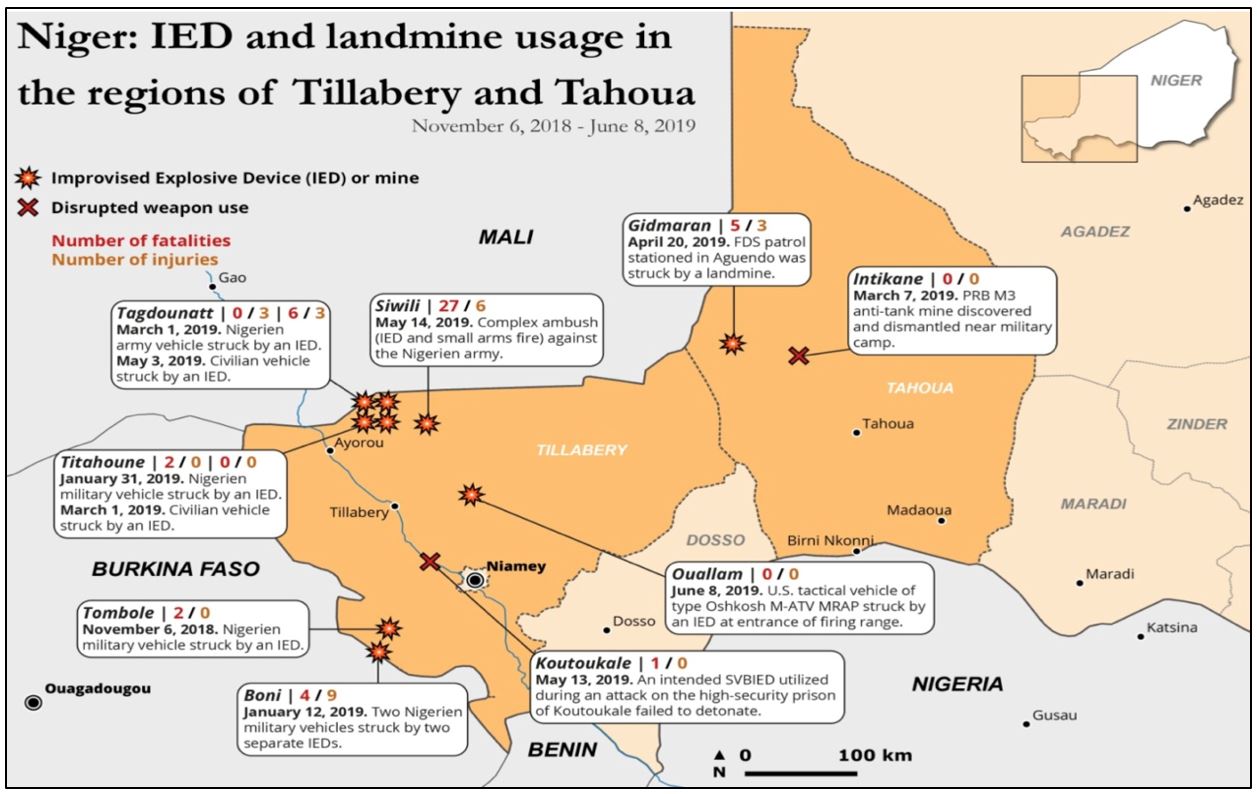 The geographic spread of this IED campaign also indicates that this newly-acquired tactical expertise is spread across multiple groups. A shift towards IED use in the neighboring countries of Burkina Faso and Mali preceded a new focus on territorial contestation – suggesting that these developments can likely be similarly expected in Niger moving forward. Explosive devices are not a novelty in Niger: armed groups widely used landmines during the 2007-2009 rebellion, and Islamic State West Africa Province (ISWAP) and Boko Haram militants have deployed IEDs in the Diffa Region in the context of the Lake Chad insurgency. However, IEDs are a new feature of the insurgency in the regions of Tillabery and Tahoua — and their sudden onset indicates a shift in ground reality beyond the natural evolution of ISGS capabilities. This IED campaign began seven months ago and has remained consistent – indicating that IED usage is an important and lasting trend. Additionally, the lethality of these IED attacks demonstrates the campaign’s capacity to shift ground realities substantially. A recent ambush against the Nigerien army involving an IED constituted the deadliest attack ever recorded in western Niger, and an IED attack targeting U.S. Special Forces near Ouallam represented the first confirmed IED attack targeting U.S. forces in Niger.

In addition to the successfully executed IED attacks, an intended suicide vehicle-borne improvised explosive device (SVBIED) failed to detonate amidst an attempted prison break targeting the Koutoukale high-security prison, located approximately 35 kilometers northwest of the capital Niamey. In total, at least nineteen people have been killed and eighteen injured as the direct result of these explosive devices. The sudden onset, consistent usage, and increase in lethality indicate that this IED campaign is a clear step-change for ISGS in the region. This step-change itself indicates increasing coordination between ISGS and other regional and global organizations. The IED campaign corresponds with ISGS’s shift towards the global through the re-established connection with the parent organization Islamic State (IS) central. Additionally, ISGS has been incorporated into ISWAP as broadcasted in IS’s media campaign – potentially engendering growing ties between ISGS and ISWAP though this connection has yet to be substantiated on the operational level. This IED campaign corresponds to increased ties between ISGS and IS central, but inter-militant group movement also spurred this change in tactics. 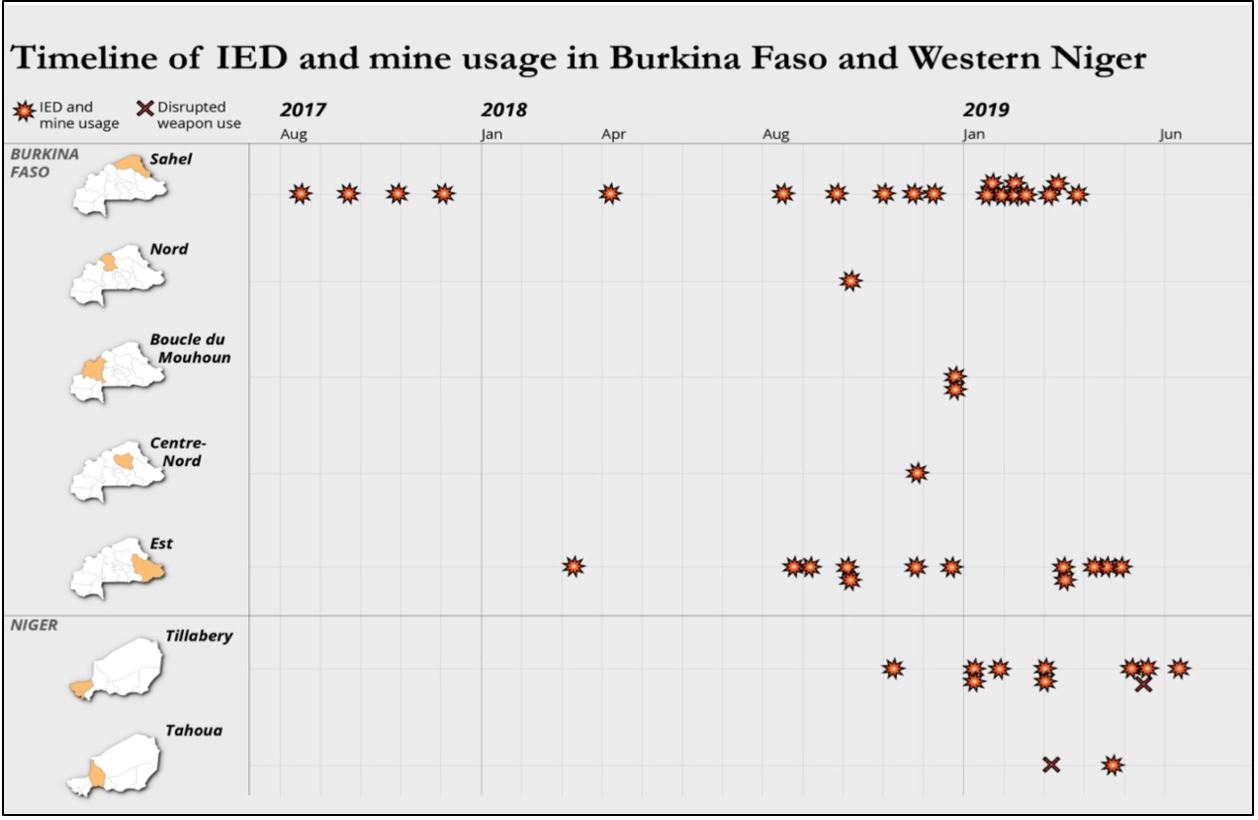 The increased use of IEDs in Niger has several implications for the trajectory of the insurgency. Non-state armed groups are diversifying and adapting their modes of engagement with their adversaries. Moving forward, it is likely that the insurgency in Niger will dramatically escalate, not because of the IEDs, but because of what they imply about the increasing freedom, tactical expertise, and connections of the groups operating there. Additionally, other militant activities, not just IEDs, indicate that groups like ISGS and JNIM will increasingly contest territory in Western Niger. There is also the potential for further mutation and escalation of the insurgency through the solidification of nexuses between IS branches in the region.

The opposition parliamentary group, composed of deputies of the Lumana, Hankouri and Kiishin Kassa parties; on Monday, June 24, tabled a motion of censure against the government of Birgi Raffini. The motion was immediately read by the parliamentary secretary in plenary. In accordance with the Constitution and the provisions of the rules of procedure of the National Assembly, the motion will be examined within 48 hours. In the letter of motion addressed to the prime minister and head of the government, the 35 signatory MPs announced that they had decided to seize this legal route offered to them by the Constitution, “out of duty to the people to condemn the catastrophic governance that characterizes your management of the public thing by telling you that too much is too much and that we will have to make the apron “. The motion of censure comes on the eve of the AU Summit hosted by Niger from July 4 to 8, but also a few days before the end of the ordinary session of the National Assembly.

Niger’s Minister of Health Idi Illiassou Maïnassara presided on Friday in Niamey to open a round table of technical and financial partners in the health sector for the five-year financing of the National Strategic Plan for Product Supply health. Faced with the problem of the availability of quality products, which is a major concern of the health authorities, the Ministry of Health has drawn up this strategic plan 2019-2023, for an overall budget estimated at more than 18 million euros, aimed in particular at to establish a single supply chain. According to Mr. Mainassara, the implementation of this plan should lead to a strengthening of the governance and coordination of the national procurement system to guarantee its transparency, the strengthening of the organizational capacities of the key institutions of this system and that of human resources to ensure the availability of quality health products and, finally, the sustainability of the financing of the system for medicines and health products.

The United Nations Economic Commission for Africa (UNECA) on Friday urged African countries to mobilize abundant domestic resources in the face of uncertain global trade conditions. This urgent appeal was launched by Andrew Mold, Director of the Eastern Africa Office of ECA, who stressed the need for this measure for economic development and industrialization. “At a time when global trade is characterized by great uncertainty and the rest of the world is turning more and more inward, it is good for Africa to unite and mobilize the abundant opportunities available on the continent. this continent, “said Mold, quoted Friday by a statement from ECA. The Director of ECA also noted that the imminent Agreement on an African Continental Free Trade Area (CFTA) represented a “unique opportunity” that would facilitate intra-African trade in the context of global uncertainties.