Covid-19: the state of emergency proclaimed throughout the territory of the Republic of Niger

On instructions from the President of the Republic, the Council of Ministers adopted on Friday, March 27, a decree proclaiming a state of emergency throughout the territory of Niger. According to the government, this measure aims to counter the pandemic of coronavirus.  The President of the Republic decided, and the government adopted. Following the message to the nation of the Head of State of March 27, 2020, the Council of Ministers, which met on the same day, adopted, as Minister of the Interior, a draft decree proclaiming a state of emergency over the entire territory of the Republic of Niger. This decision was motivated by the need for the State, to be able to take exceptional measures to deal with the coronavirus pandemic, which is raging in Niger and in the world, as explained by the government in the press release which sanctioned the Council of Ministers.

Covid-19: under curfew, Niamey is also isolated from the rest of the country for at least two weeks

It is no longer possible to enter or exit Niamey for at least the next two weeks. The Nigerien capital which spent Saturday March 28, 2020, its first evening under curfew, is also in “sanitary isolation” and will therefore be cut off from the rest of the country. Measures that aim to contain the spread of Covid-19 in the city where almost all the cases registered to date in the country are concentrated.  By order of the Governor of the Niamey Region, it is prohibited to enter and leave the city of Niamey from Sunday March 29, 2020 at midnight and for two weeks renewable. Some exemptions have been granted in the decree with regard, in particular, to the entry of goods, the missions of the Defense and Security Forces (FDS) as well as medical evacuations.

Public administration: new timetables and new rules to adapt to the fight against Covid-19

The government has adopted a series of changes in public administration to ensure the smooth running of services during the period of implementation of measures to fight the coronavirus pandemic.  From Monday, March 30, the public administration adopts new operating rules to adapt to the fight against the Covid-19. The Council of Ministers of Friday March 27 has, in fact, reorganized the working hours during the implementation of the measures taken by the authorities in the same framework. The working hours from Monday to Friday are now from 8 a.m. to 2 p.m. without interruption.

From March 3 to 23, the Barkhane force, jointly with the Nigerien (FAN) and Malian (FAMa) armed forces, led the operation “MONCLAR” in the region of the three borders. This engagement, unprecedented by the volume of forces engaged, made it possible to obtain very significant results concretized by the neutralization of a large number of terrorists, and the destruction or the seizure or very large military resources, announced the state- major of the French army in its latest update on external operations.

The canton of Kornaka, in the department of Dakoro (Maradi region), has a new chief. They are Elhaj Abou Kouré Jackou, elected on Saturday March 28, 2020 in Kornaka after a vote in which six other contenders took part, including Sanoussi Tambari Jackou, the Minister Counselor for the Presidency and president of PNA Al ‘Ummah. 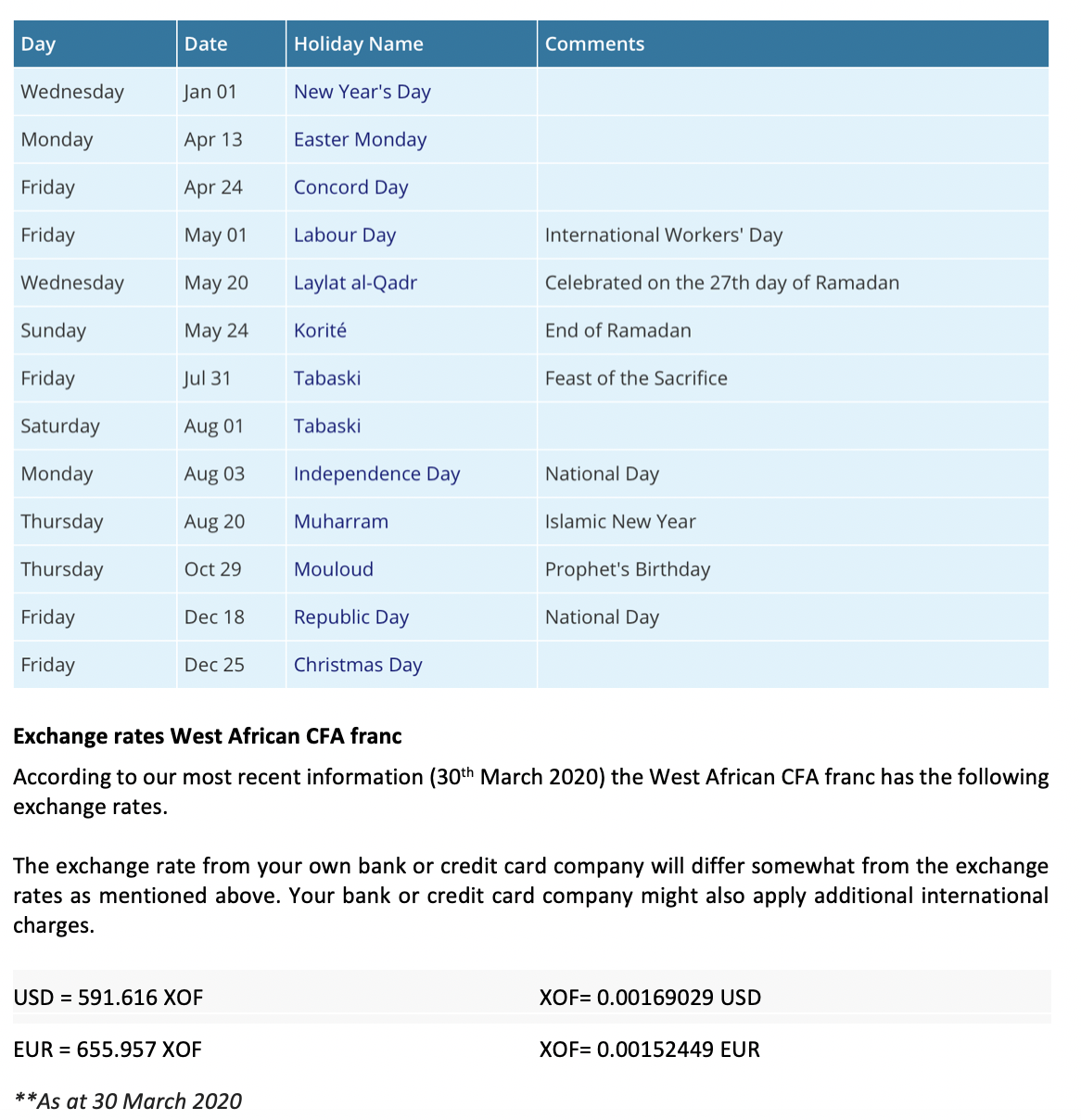 A:  COVID-19 is a virus strain, first identified in Wuhan, Hubei Province, China, that has only spread in people since December 2019.

Health experts are closely monitoring the situation because little is known about this new virus and it has the potential to cause severe illness and pneumonia in some people.

Q:  How does COVID-19 spread and what are the symptoms?

A:  COVID-19 is primarily spread through respiratory droplets. That means to become infected, you generally must be within six feet of someone who is contagious and come into contact with these droplets. It may be possible to get COVID-19 by touching a surface or object that has the virus on it and then touching your mouth, nose, or possibly their eyes, Symptoms of COVID-19 appear within two to 14 days after exposure and include fever, cough, diarrhea and shortness of breath.

Q:  How long does it take for symptoms of the COVID-19 to appear?

A:  The CDC believes that symptoms of COVID-19 may appear in as few as two days, or as long as 14 days after exposure.

A:  There is currently no FDA approved medication for COVID-19. People infected with the virus should receive supportive care such as rest, fluids and fever control, to help relieve symptoms. For severe cases, treatment should include care to support vital organ functions.

A:  Currently, there is no vaccine available.

Q:  How can I best protect myself?

A:  Practice the following:

Q:  Should I wear a face mask?  Will that help protect me?

If you are not sick:  You do not need to wear a facemask unless you are caring for someone who is sick (and they are not able to wear a facemask). Facemasks may be in short supply and they should be saved for caregivers. 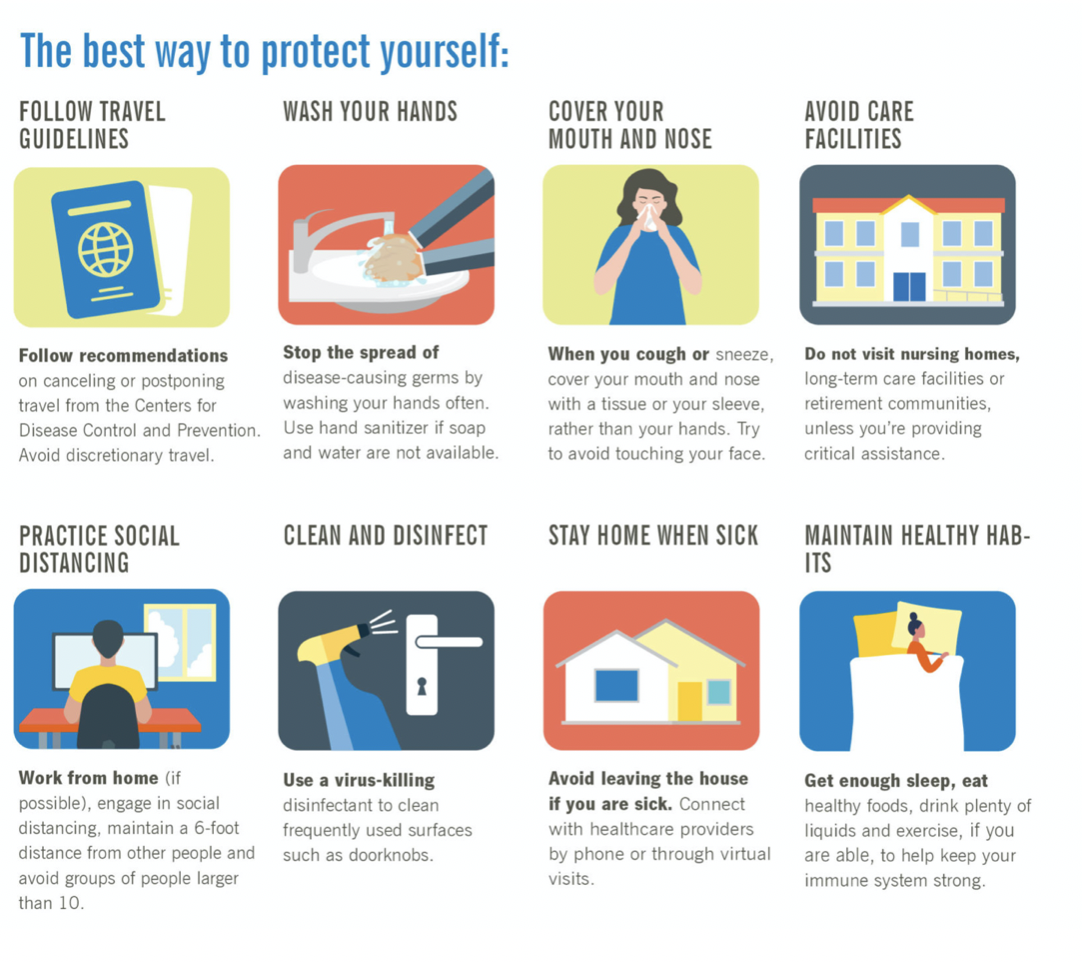 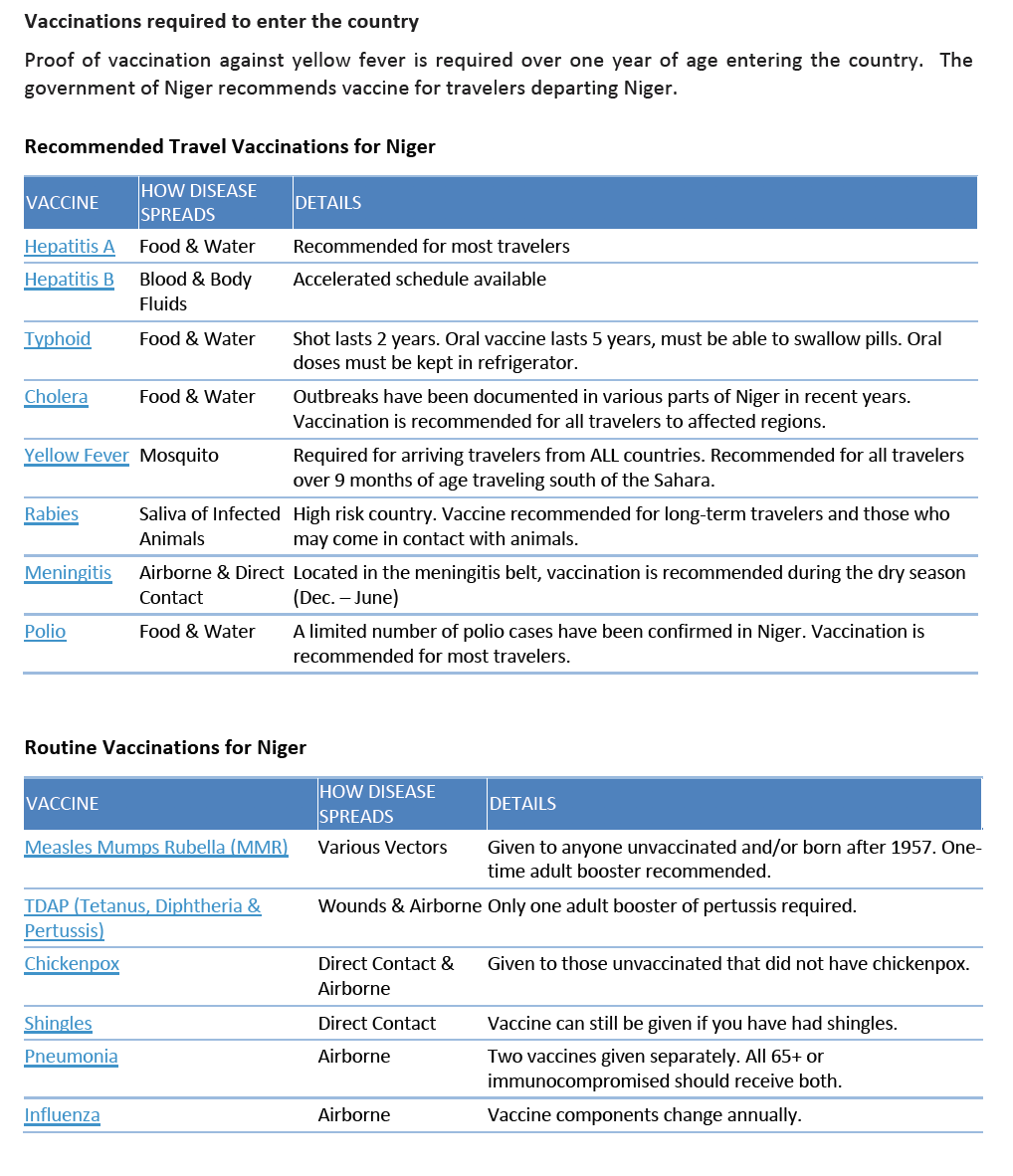 The Department of State advises U.S. citizens to avoid all international travel due to the global impact of COVID-19.  In countries where commercial departure options remain available, U.S. citizens who live in the United States should arrange for immediate return to the United States, unless they are prepared to remain abroad for an indefinite period.  U.S. citizens who live abroad should avoid all international travel.  Many countries are experiencing COVID-19 outbreaks and implementing travel restrictions and mandatory quarantines, closing borders, and prohibiting non-citizens from entry with little advance notice.  Airlines have cancelled many international flights and several cruise operators have suspended operations or cancelled trips.  If you choose to travel internationally, your travel plans may be severely disrupted, and you may be forced to remain outside of the United States for an indefinite timeframe.

On March 14, the Department of State authorized the departure of U.S. personnel and family members from any diplomatic or consular post in the world who have determined they are at higher risk of a poor outcome if exposed to COVID-19 or who have requested departure based on a commensurate justification.  These departures may limit the ability of U.S. Embassies and consulates to provide services to U.S. citizens. 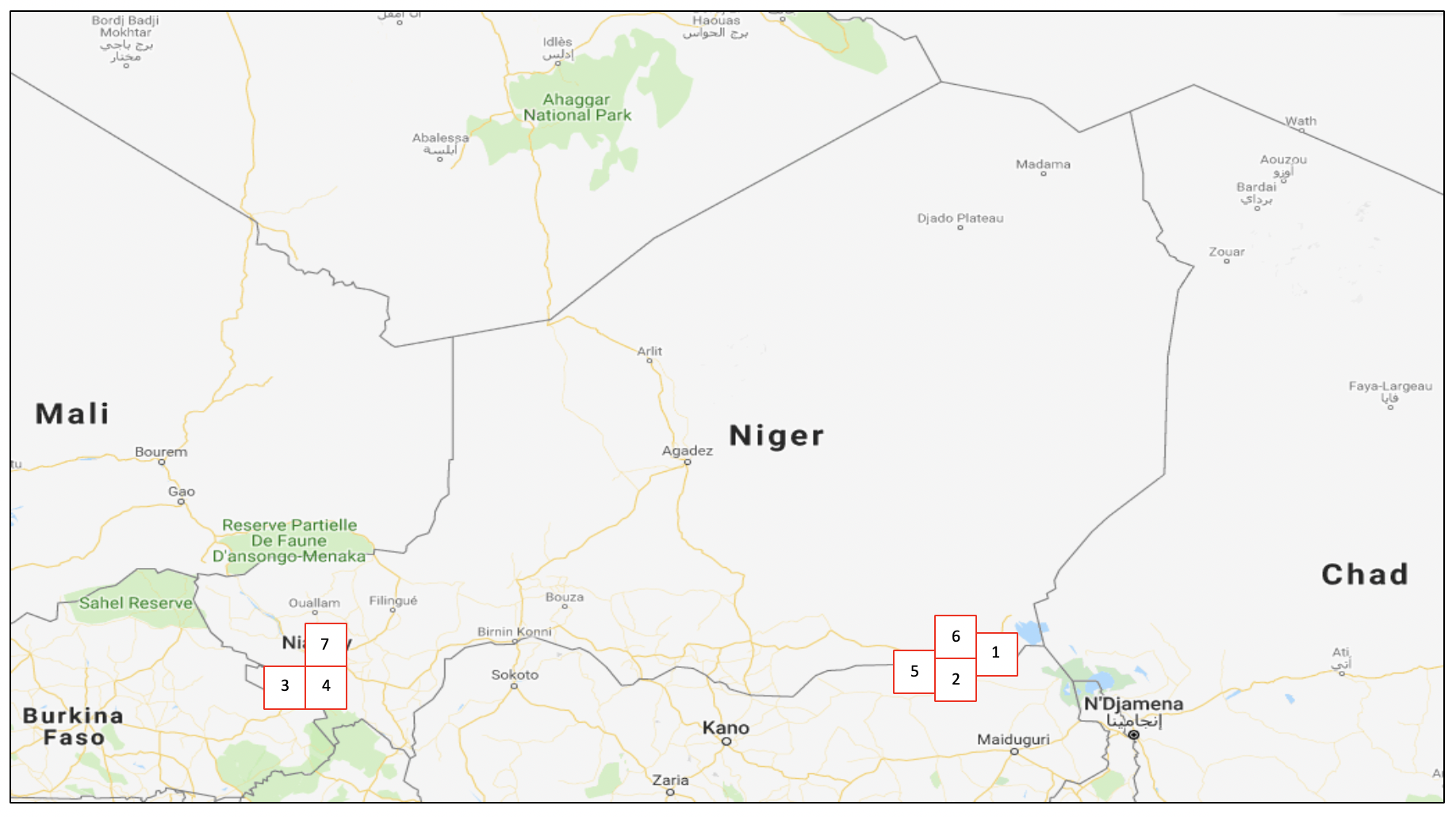 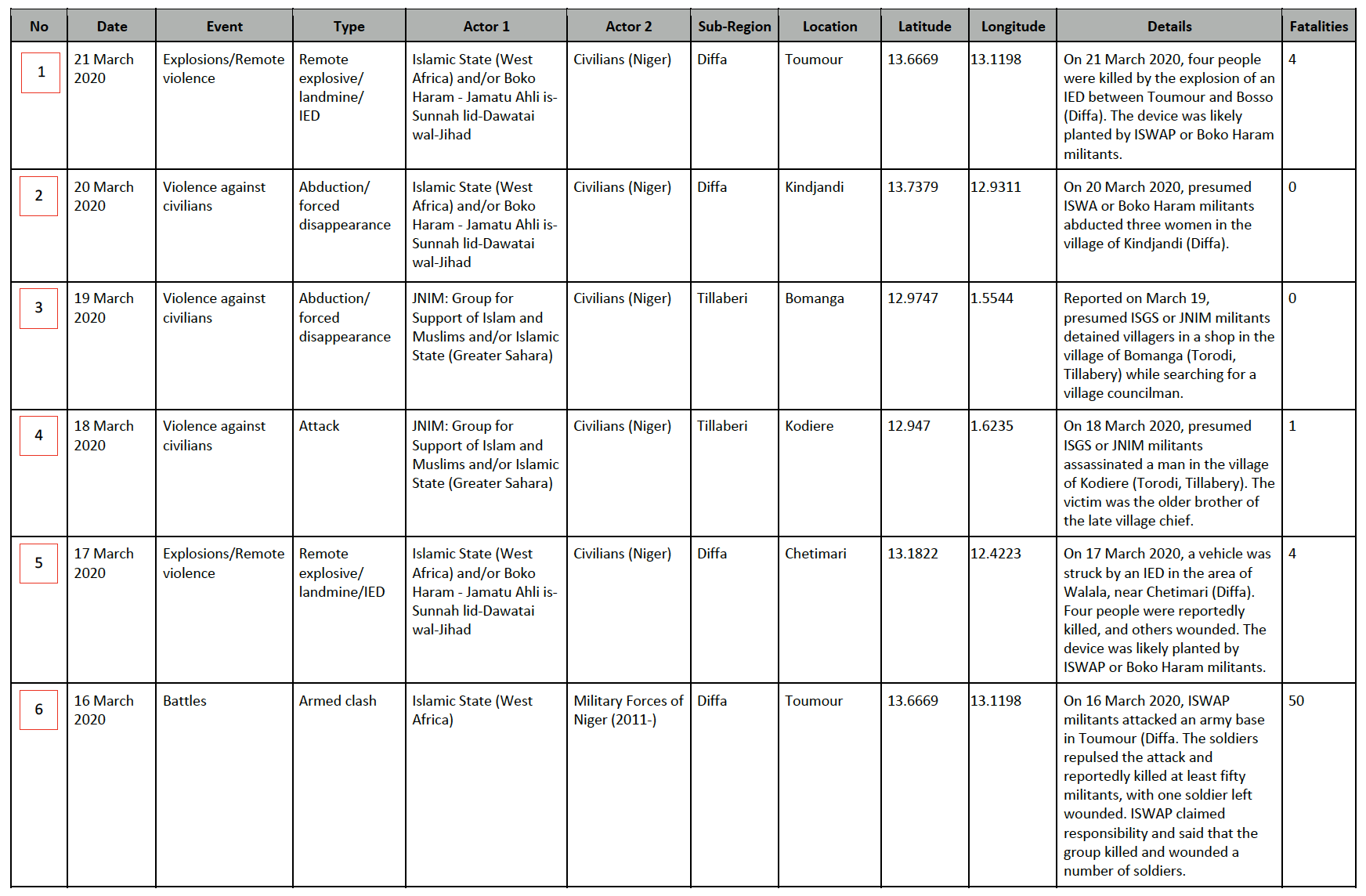 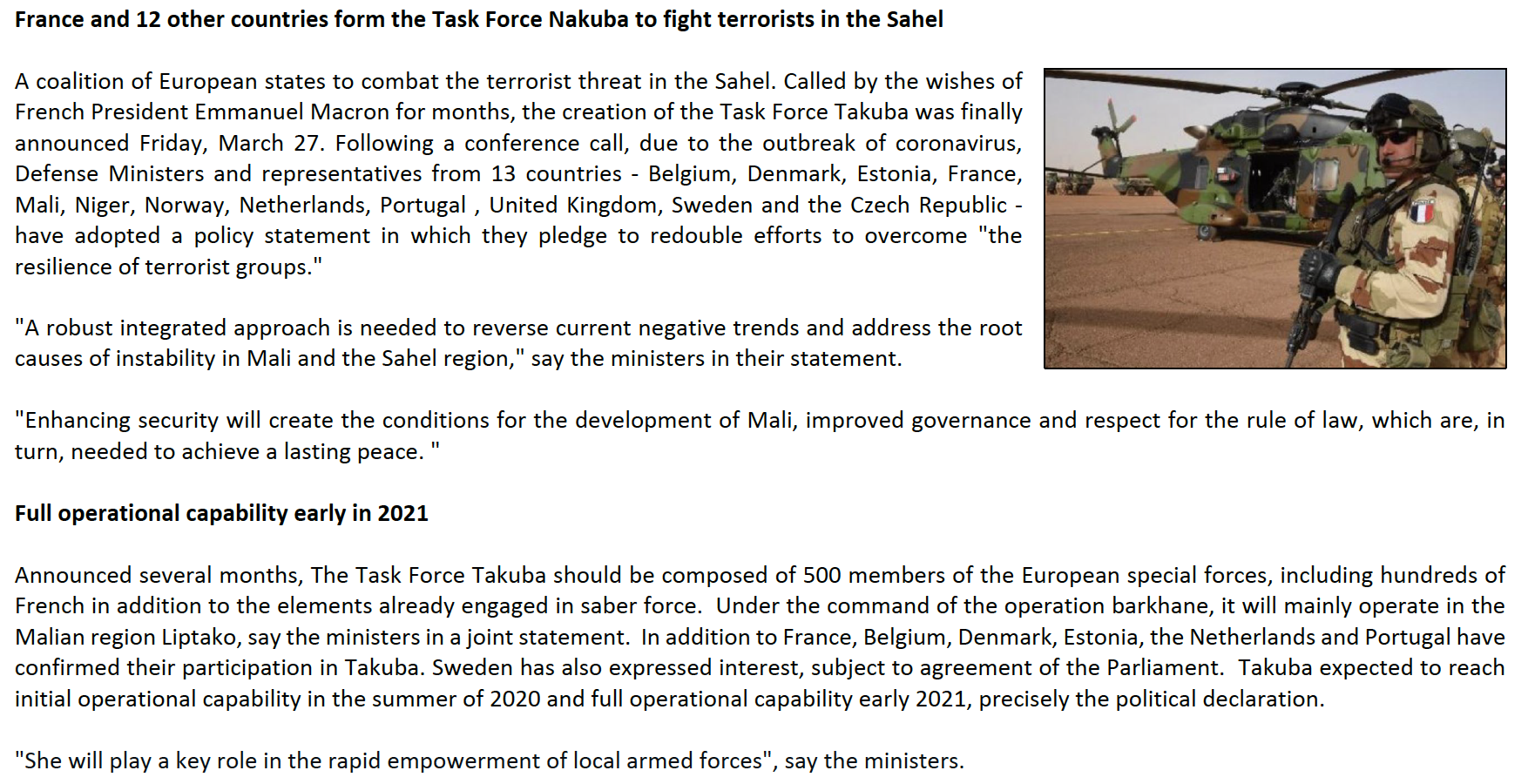 On instructions from the President of the Republic, the Council of Ministers adopted on Friday, March 27, a decree proclaiming a state of emergency throughout the territory of Niger. According to the government, this measure aims to counter the pandemic of coronavirus.  The President of the Republic decided and the government adopted. Following the message to the nation of the Head of State of March 27, 2020, the Council of Ministers, which met on the same day, adopted, as Minister of the Interior, a draft decree proclaiming a state of emergency over the entire territory of the Republic of Niger. This decision was motivated by the need for the State, to be able to take exceptional measures to deal with the coronavirus pandemic which is raging in Niger and in the world, as explained by the government in the press release which sanctioned the Council of Ministers.

Prime Minister Brigi Rafini chaired, this Wednesday, March 25 at the Palais des Congrès in Niamey, a round table of resource mobilization in favor of the “National Contingency Plan” intended for the fight against the Coronavirus pandemic in Niger.  The meeting brought together members of the Government of Niger and the technical and financial partners of Niger. It aims to mobilize the necessary resources in order to contribute effectively to strengthening and maintaining the adequate capacities of the country in order to ensure the effectiveness of the prevention, preparation, detection and reaction to the threat of Covid 19 weighing on public health.  Opening this conference, the Prime Minister indicated that in all the affected countries, “the coronavirus pandemic has implications in terms of health management and in terms of impact on the economic situation”, clarifying that health management involves efforts important in terms of prevention, communication and care for sick people.

The Confederal Executive Office of the General Confederation of Free Trade Unions of Niger (BEC / CG. SL-Niger) followed with particular attention the events arising from the audit of the Ministry of National Defense and the government’s biased press release which sparked strong reactions in public opinion and in particular structures such as the Autonomous Syndicate of Magistrates of Niger (SAMAN), the Association of Young Lawyers of Niger (AJAN) and the Bar; events leading SAMAN observed a day of dead justice throughout the national territory.  The CGSL NIGER, attached to the republican principles of the Rule of Law and Democracy, gives its firm and total support to SAMAN in its unshakable will to establish independent and balanced free justice in Niger and urges the Government to speed up the process. and to transmit the final report to justice, the only institution capable of innocent the accused.